The Woman in the Basement

A lifetime of paranormal occurrences

Hi, my name is Jennifer. I’m 36 and I grew up in a small town in Southwest Oklahoma. I have been experiencing unexplainable phenomena most of my life off and on. I have several stories I’d like to share so I’ll start from the earliest memory. The first strange experience I remember having started very early in childhood from around ages 5 to 7. At that point in my life I lived in Missouri in a forested area with no neighbors. I am the oldest of 3 kids and slept by myself at that point. I remember almost every night when I went to sleep I had the same strange experience. I remember feeling a sensation as if I were floating/falling and I was surrounded by various colors and at times total darkness. It seemed so real. I stopped having this experience after we moved to Oklahoma at age 7.

I had my first strange experience in that house when I was 12.

I was getting ready for school one morning and as I stood in the bathroom with a hairbrush on the counter I noticed right in front of me the hair brush raised up handle first into mid air almost level with my face. I still don’t know why I did this to this day but I grabbed the brush, quickly ran it once through my hair then I threw the brush and ran out of the bathroom. I remember feeling really freaked out and tried to tell my mom but she didn’t believe me.

The following year in middle school I started reading some books in the occult section of the public library and made friends with a small group of kids my age with a similar interest in the subject. We didn’t do much other than goof off at the library after school reading spooky books and attempt to send each other telepathic messages with our mind.

This is when I started noticing more strange things. It started with a very vivid dream I had of our Burmese cat Pandora. In the dream I got out of bed and walked down the narrow hallway into the living room at night to see the TV was on playing the show The Secret World of Alex Mack while my cat was sitting in the middle of the living room and started talking. In the dream I knew she was possessed and that I had to get rid of her. I remember walking to the front door in the dream while carrying this talking cat. I remember how the doorknob felt cold when I turned it to go outside. In the dream I then threw her towards a house across the street where she would just bounce back into my arms so I’d throw her again.

Finally in the dream she stopped bouncing back and I went inside and crawled back in bed. The next morning I remembered every little detail of the dream and couldn’t shake the feeling of how real it seemed. That morning as my mom was driving us to school we saw a cat identical to Pandora in the street that had been run over. No one saw our cat that morning so we all assumed she somehow got out and was hit.

After school that day we found our cat was just fine and realized it was just a look alike in the street that morning. I still felt creeped out about the whole thing.

Later the same year I was sitting in my bedroom alone talking on the phone with my friend Sonya. I don’t remember what we were talking about but suddenly I couldn’t hear and kept saying her name.

I then heard a soft female voice I didn’t recognize speaking to me through the phone. The voice called me by name and claimed to be an angel and said for me to not be afraid. I got up from my bed and started pacing around the room freaking out and the voice then said she was at the foot of my bed.

I was really scared at that point and started asking what this was about and what they wanted. The voice then told me that I was supposed to go down into our basement on Halloween night.

The voice said I was to light a candle in the dark basement and that I would see the face of an old lady. The voice then told me that when I walk down the long hallway of the house to not look behind me or I would see the old lady following me. The voice then said she had to go and was leaving. Right about then I could hear my friend Sonya on the phone saying my name and asking what was going on. I asked if someone was playing a joke and she had no idea what I was talking about.

I started to cry and tell her everything about the voice on the phone. I was so shook up and scared to be home alone so she put her mother on the phone to try to calm me down. Her mother believed in demons etc and told me she thought it was something dark and not an angel communicating with me. Her advice was to have the house blessed.

We never did have the house blessed and I didn’t talk to anyone about the voice on the phone because it scared me so much. I didn’t sleep very well for awhile after that.

When Halloween rolled around that year I didn’t go into the basement. I felt like something bad was going to happen if I’d done what the voice asked. I knew my parents had briefly mentioned at some point that an older lady had fell down the steep basement stairs years ago and passed away from the injury.

The next year in 8th grade I was sitting in history class taking a quiz. Across the classroom was one of my friends. We both agreed that after the quiz we would try to send messages to each other telepathically. I know, sounds dorky but we wanted so badly to make it happen.

Well, something else happened that day.

After I finished the quiz and turned my paper over I closed my eyes and leaned my head onto my fists to look like I was looking down. I thought I’d concentrate on saying my friend’s name Aaron to see if he’d get the message. After what felt like several minutes I heard the history teacher scream and I felt the little wooden desk and chair I was sitting in land hard on the floor as if the desk and chair were off the floor while I was sitting in it.

I remember looking around and the entire class was staring at me. I wasn’t sure what had happened because my eyes were closed the whole time. Later on in high school a guy that was in that class was telling another guy about the incident and started asking me how I was able to raise myself and the desk/ chair. I told him I had no idea and ignored him.

Years later I saw him in a store and out of curiosity I asked him to tell me exactly what he saw. He just kept shaking his head no and wouldn’t say a word to me. He seemed very agitated and scared. I’ve always wondered what exactly happened that day in history class.

My friend Aaron that I was attempting to communicate with that day ended up moving and we lost touch.

The other strange thing that happened that year in 8th grade was when I had a random dream about a girl from school. I didn’t know this girl very well and had no idea why I dreamed about her. In the dream I remember she was in a hospital and died. There weren’t many other details to the dream. I didn’t give the dream much thought until the next day when a friend from school came by the house to see me. She mentioned the girl had passed away. I hadn’t even mentioned anything about my dream yet. I told my friend about the dream and we both thought it was pretty weird.

When I got to high school I didn’t experience as much strange phenomena for awhile until I graduated. I still lived at home the next few years and that’s when I started experiencing more stuff in that same house.

I remember one night I had just clicked off the light and got under the covers. I had only been in bed maybe a minute when I heard what sounded like loud fingernails scratching the pillowcase next to my head.

I immediately bolted up and turned on the light then slept with the covers pulled over my head.

When I think back to that night I have no idea why I stayed in that room or why I thought having the covers over my head would keep me safe. I occasionally would hear my name called in that house but it was never any of my family.

The last time I stepped foot into that house was after I moved out I went to visit my mom. She had just divorced my dad and was getting ready to move out of the house. My husband and I were standing in the kitchen talking with my mom. I don’t remember what my mom had said but I remember hearing a deep male’s voice right beside us say the word ‘yes’ as if agreeing with what my mom was saying.

It freaked me out and of course my husband and mom didn’t hear it and brushed it off.

My mom had one particular experience seeing an apparition in that house of my dad’s friend that committed suicide. Whenever I ask her for more info on this incident she doesn’t want to talk about it.

I’m hoping someday to hear more of her experience and share it with her permission.

I have many more experiences to share that I’ve experienced either with my husband or a friend in more recent years. I’ll share those with you all another time.

Hope you enjoyed these weird experiences I had growing up in that house. I’m interested to know if anyone else has had anything similar happen to them. I love your podcast!

Talk to you later,
Jennifer

END_OF_DOCUMENT_TOKEN_TO_BE_REPLACED 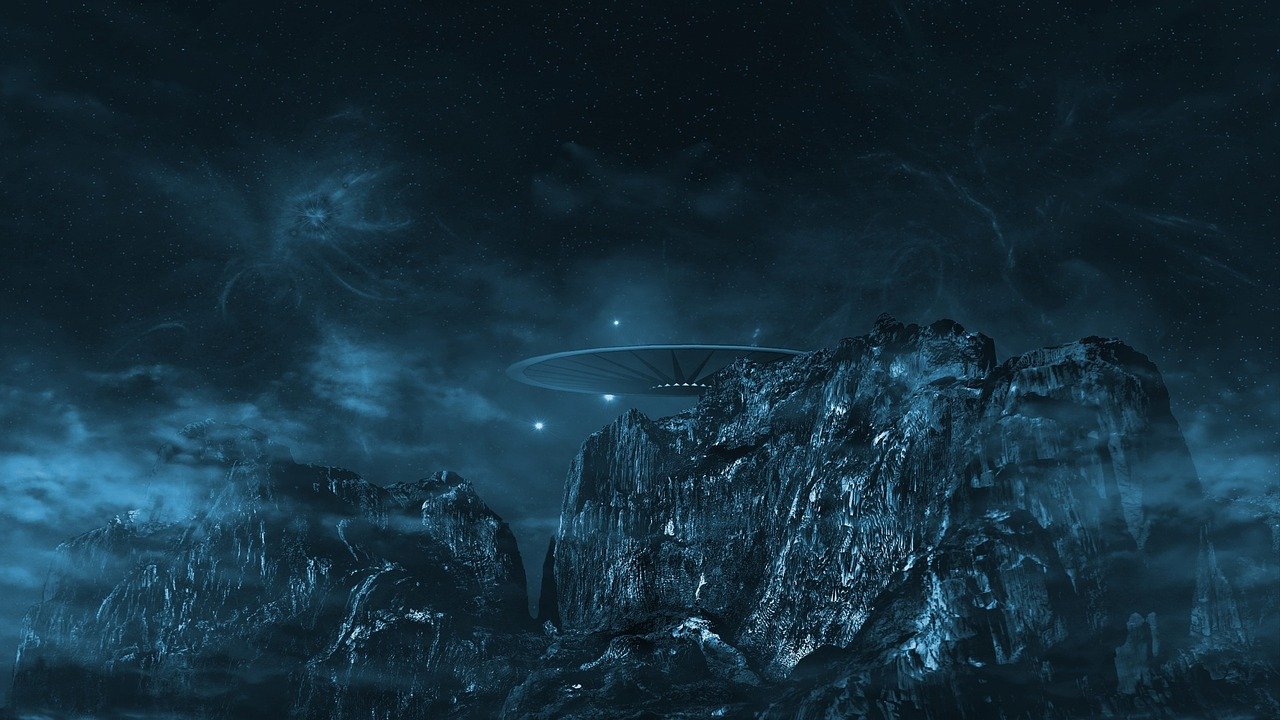 A Night on the USS Nimitz – True UFO Story

Officer Testimony: UFO Sighting While Aboard the Nimitz in the 90s  WITNESS Tracy Last Name RedactedDate | 1994-1997Location | Off the Coast of San Diego Related Episode Listen to this story in 3.14 | Listener Stories 10 here: LISTEN TO RELATED EPISODE THE STORY: I...