Something Unearthly Roams the Halls

In your rented home, alone for now, with roommates weeks away, there’s nothing to keep you company in the dead hours of the night, except for that macabre painting you noticed when you arrived -the one at the end of the hall – a grim scene of highway murder… It shares the idle hours with you.

And in the silence, things are beginning to stir. Something dead is pulling itself through its painted prison and into your hallway, and it’s walking toward your room!

From insane asylum key masters to Hawaiian spirit seduction, we pull at the threads of the ever-thinning veil as we arrive halfway to Halloween to bring you true and terrifying tales of the inexplicable and the unknown!

In each episode of Knock Once for Yes, Lil & Fitz share their own spooky experiences with the paranormal, visit haunted locations, explore local legends & urban myths as well as share several of our listeners’ real ghost encounters.

Go subscribe, and tell them Belief Hole sent ya 😉

We especially want to thank our most generous supporters. New Sky Whale Riders this week. Thank you for being awesome:

Hey guys, My name is Tom and I have a weird ghost story you may be interested in. People think I’m crazy when I tell this story but it’s 100% true… okay, here we go.

When I was in my early 20s I was working full time and was going to college for Criminal Justice. I moved into an older 70s suburban house with two other roommates who were doing the same. The house wasn’t anything spooky looking, just a typical 4-bedroom block house with an open kitchen and living room in the middle set in a nice neighborhood near

the college. The house was owned by the father of one of the roommates, who was a doctor. He kept a lot of old medical records in the house and collected old war memorabilia, including a 14ft wide, 8ft tall Painting of a family of travelers being pulled from

their carriage and murdered by highwaymen in the late 1700s. It was a horrific thing and nobody could barely stand to look at it. It hung proudly in a little sitting room right off the front entrance to the house. My roommates 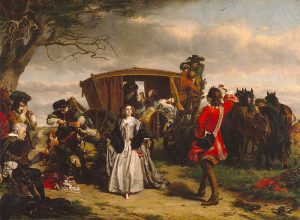 father said that the frame alone was worth over $10K and we were NOT to even go near it.I did some research and found that this type of painting was randomly common in the 18th century although I could find no information about this particular painting.

I moved into the vacant house about a week earlier than my other two friends and right away it felt eerie there. Cold spots, faint whispering sounds, bumps and noises, but I just chalked it up to being in an unfamiliar place. My room was at the end of a long hallway across from an unused room that had no windows. The windowless room had such a bad feeling that nobody even dared walk inside it. This was the room where the owner kept a lot of his old medical equipment and files of all sorts. Sometimes when I walked down that long dark hallway at night I could hear what sounded like several people whispering and I would feel like someone was walking RIGHT behind me. Once I even felt something’s spindly fingers touch my shoulders, as if someone was reaching to choke me, which made me RUN to my room. I hated that hallway. The door to the windowless room would open itself. I would bravely stick my arm inside the room and lock the door from the inside and pull it closed and make sure it was locked, then the next time I would walk by, the door would be slightly open again.

When the second roommate moved in, he started tearing down the old wallpaper in his room and he started experiencing things as well. Doors would slam shut even though you normally had to push them over the thick carpet. His room would get freezing cold even in the summer. He and I would be playing N64 in the living room and pots and Tupperware would go flying off the counter in the open kitchen or cabinets would open and slam shut. We would just get up and leave for a bit.

The third roommate took the master bedroom (it was his dads old house) with two walk-in closets and a huge bathroom. One of the walk-in closets backed up to the windowless room and it felt so evil that the 3rd roommate kept it empty and locked. He saw and heard things too, but refused to acknowledge them.

One night we were having a party with maybe 25 people from work and college there, people were drinking but not excessively, talking and having fun listening to music. I excused myself from the party to go pick up my then-girlfriend from work. When we returned, the house was silent and EVERYONE was out in the back yard, quietly talking. When I went outside they rushed me. Apparently while everyone was having a great time in the living room, they saw a full body apparition, that looked exactly like the man being murdered in the painting, WALK out of the painting, through the room with the painting, and down the hallway towards my room and disappear around the corner. EVERYONE saw it. several people gasped and pointed it out, because you could see right through him as they depict in so many movies. Everyone left, including us that night. I had seen glimpses of the same man but only from the corner of my eye while I was alone in the house.

One particular night I was home alone, just home from work and getting ready to go meet my roommates at a local bar. As I was getting ready, and I know this sounds ridiculous… but the whole house started to vibrate as if there was an earthquake. But as we live in Florida, that was not the case. My roommates girlfriend had left her dog there and the dog was going ballistic. He was barking and clawing at the sliding-glass doors trying to get out! The house continued to vibrate and the vibrations got so intense it was making me dizzy. I had had enough and I went into my room and grabbed a sword that I kept over my desk. I unsheathed the sword and walked down the hallway towards the room with the painting. I just KNEW the painting was the cause. The closer I got to the painting the more brutal the vibrations got, pictures were falling off the walls. Feeling almost nauseous I stood bravely in front of the giant painting with my sword clutched tightly in my fists and yelled at the painting… “STOP THIS NOW OR SO HELP ME GOD I WILL SLASH THIS PAINTING TO RIBBONS!”

The vibration got so intense I felt like I would fall to my knees… and then all it once, it stopped.

I took the dog and left the house immediately and went to find my friends. I stayed at a friend’s house that night and my friend, who was at the party and had seen the ghost, reluctantly came to the house with me. He was Cuban and his Abuela had taught him how to rid a house of evil spirits with candles, burning sage and prayer. So we spent some time doing that.

We didn’t have much activity after that and us three roommates quickly became irritated and distant towards each other, so I moved out. The 2nd roommate moved out 2 weeks later, then the owners son and soon the house was sold and everything inside, including that evil painting was moved to an undisclosed location.

I still talk to the 2nd roommate but he doesn’t like to talk about that house. People often ask me how could I have stayed in that house for a year and my response was “the rent was reasonable”.

I have had a history of strange paranormal activity. My Father died in a car accident 11 days before I was born and my Mother died during childbirth with me, and was revived.  She said that when she died, she found herself in a large beautiful field and her husband, my father, came down to her in a strange metal craft and told her it wasn’t time for her to go, that she needed to stay behind and look after their son. Our house burned down when I was 4 and the only things that survived was my Great Grandfather’s violin, the insurance papers for the house and a smoky Ouija board that was in a metal box. My mother and a friend dusted off the Ouija board months later and the first thing it said was “Sorry about the house” so she threw it away.

She died again of complications during the c-section of my sister 10 years later.    My sister frequently saw the ghost of our great grandmother when she was little, sitting at the foot of her bed. Maybe it runs in the family.

Anyway, I am no longer scared of supernatural events and almost crave their existence. There is so much mystery in this world that most people chose to ignore, even when it lives with you. I am ever enthralled with the Belief Hole and Eagerly await every episode. Thank you so much for your hard work at entertaining us true believers. You guys are awesome! I hope you may read my story one day, I can’t wait to hear what Jon can do with the sound design of it. Please keep up the fantastic work.

END_OF_DOCUMENT_TOKEN_TO_BE_REPLACED 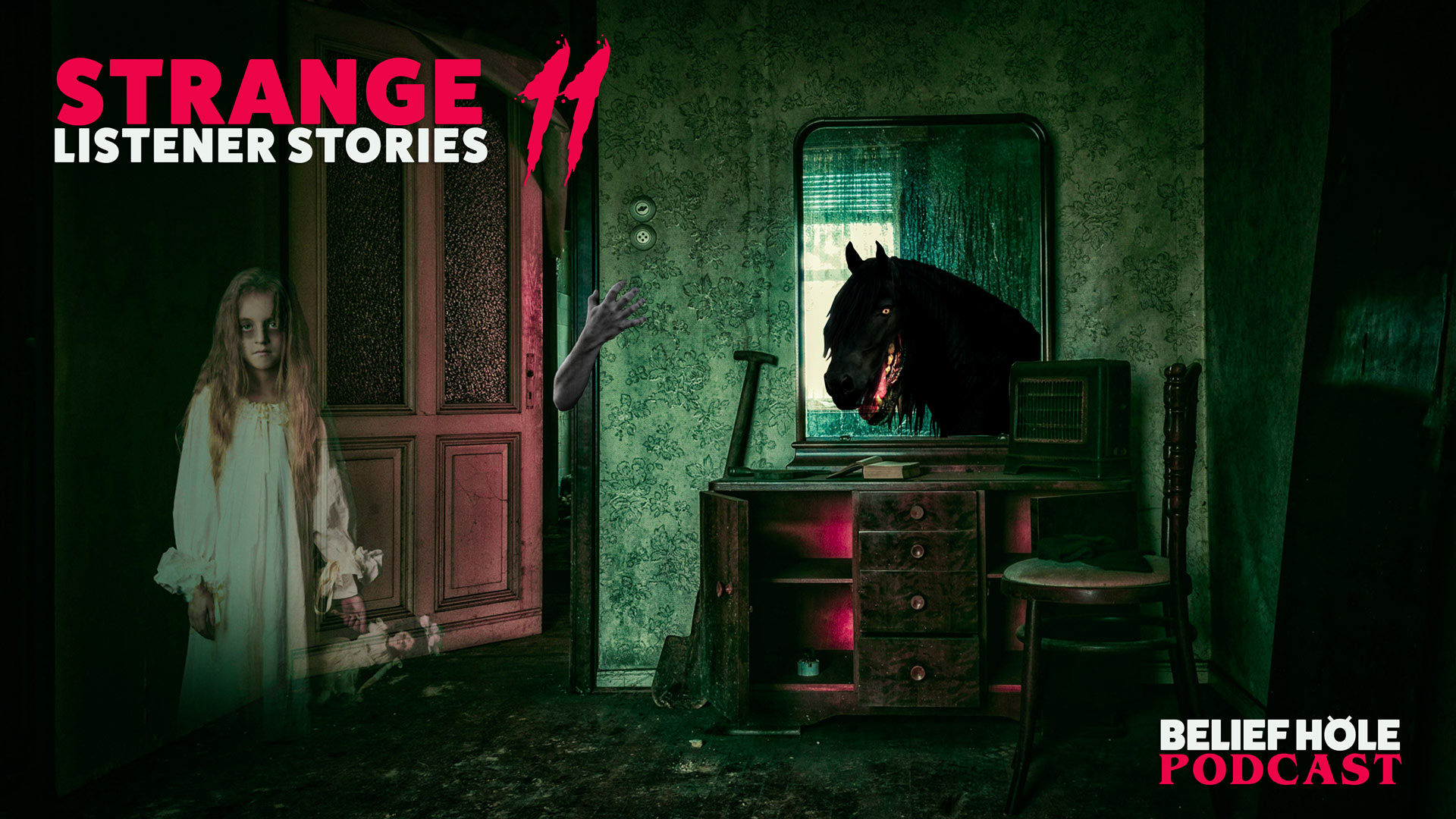