A Haunting in Northamptonshire

Honestly, I can’t remember the occasion, but I’m going to assume that my Mum had convinced some of the extended family to come round for us all to go out for lunch. We never did much as a family together, so it’s a fairly safe bet. It’s the only good reason that everyone would be out at the same time in any numbers.

Whatever the reason, Mum thought I was in Dad’s car, and vice-versa. They left for (if it was Mum’s favourite restaurant) an hour round trip, leaving me home alone.This is a time before mobile phones, remember. No WhatsApp groups or messaging between cars. They wouldn’t have even found out I was missing for at least 30 – 40 minutes.

I can remember it was a calm, warm day. English Springtime. That was how I’d been forgotten, because I’d been sat outside reading behind the house in the Rose Garden.

Some important points about my house and village. There has been a farm on top of this hill since before the 9th Century. It’s an ancient part of the countryside. The local town has been a busy trading point since the Vikings invaded and moved south into England, and was where Boudicea chased the Romans south over the river at Stamford around 61AD. My house (originally built in the 14th Century) served as the alehouse to the hilltop farms, so is one of the oldest permanent buildings in the village. Our kitchen has the original fireplace and wooden beams in the low ceiling – it’s very “Prancing Pony” if you like your Lord of the Rings references. Local legend has it that highwaymen would drink there before robbing people on the trading routes into and out of town.

Anyway, I was left alone. I don’t remember being freaked out. The family still jokes today that I was an eerily calm baby and hard to rattle as a kid. What I do remember clearly is climbing on the kitchen counter top to see if the cars had gone.

My Mum suffered with Multiple Sclerosis, which kept her in a wheelchair but didn’t stop her driving her (adapted) Nissan. At our kitchen door Dad had built a small ramp to get her up the step, and had stuck two rubber mats to it for grip. The same sort of mats you keep in your car footwell.

From the kitchen window (by the kitchen door) you could see the Barn where Mum’s car would be, but thanks to the L shape of the house, not see Dad’s garage in the other barn.

Mum’s car was gone. I had to go physically check for Dad’s.
Leaving the door open behind me (because why wouldn’t I?) I walked to the edge of the building to see for myself. No car.. Damn. Confirmation I was home by myself.

I turned around and crossed the paved area back towards the door, and stopped in my tracks..

On the right hand rubber mat, facing into the house, was a large. wet. human, footprint!

My clearest memory of this whole thing is first looking around me at the paving to see where the print had come from, but seeing none leading up to it over the dry slabs, then measuring it against my own foot to see it was definitely adult sized, even against my shoes.

Just inside the kitchen door was a collection of walking sticks Mum had used before the wheelchair, and it took all the courage I had to reach through and grab one. My last memory of being in the house was being stood at the bottom of the stairs, too terrified to go up or call out.

Not long after, Dad came home for me. Naturally, as soon as they arrived wherever they went, they noticed I wasn’t with them and he’d turned around to come get me.
I told him about the footprint, which by then had faded to almost nothing. He went around the house opening doors etc (probably humouring me) but we never spoke of it again, which is the traditional English way of dealing with problems.
I’ve remembered that day my whole life. I’m 37 now. Mum, and the mats are gone, but I still look at the paving slabs every time I go home.

Thanks guys. I love what you do. I hope my memory gave you a chill.
All the best, 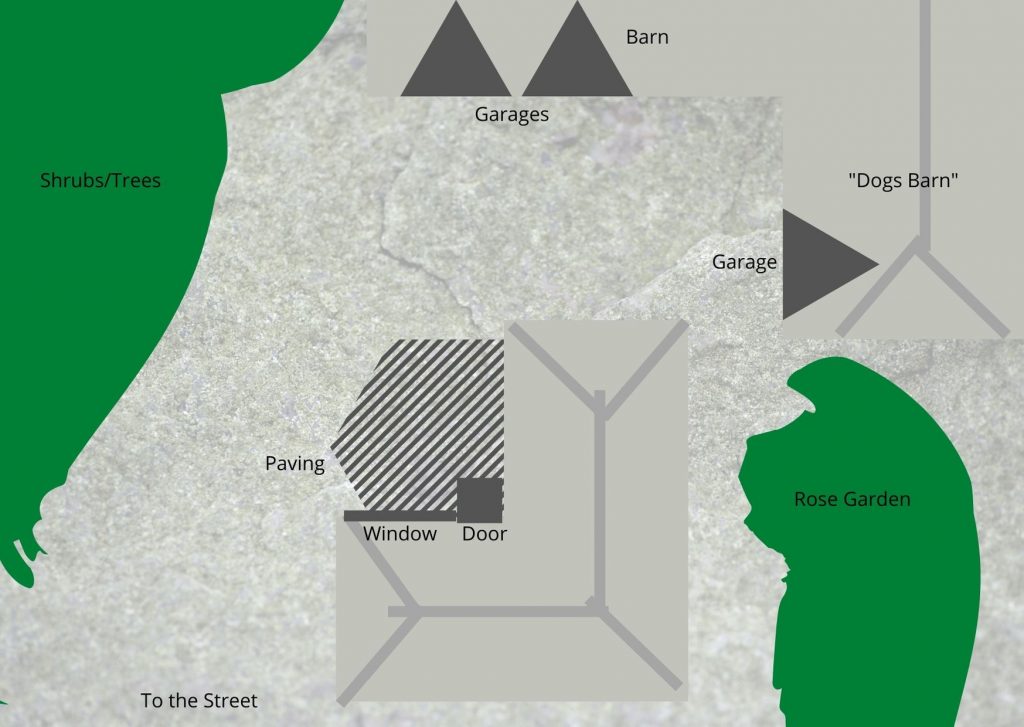 I went home actually a week or so ago for the first time in over a year (lockdown rules, etc) and brought it up with my Dad. He’s nearly 80 now but he’s real sharp for his age.

I say, innocently “Dad, you remember the time everybody went off somewhere for lunch and you had to come racing back here because you’d all forgotten me?”  and he’s like “oh, yeah. It was the ‘Paul Pry’ we went to; your Mum’s favourite. I said we should just leave you be. “He’s a smart boy, he’ll just play with his legos or something.”

“But she made you come back”

“Well, yes. You were still little. We might have been a couple of hours at least. Good job I did as well. By the time I got back you were scared stiff. White as a sheet.”

“Oh yeah. Didn’t suit you being alone at all.” He chuckled a little. “I had to carry you outside like a plank of wood.”